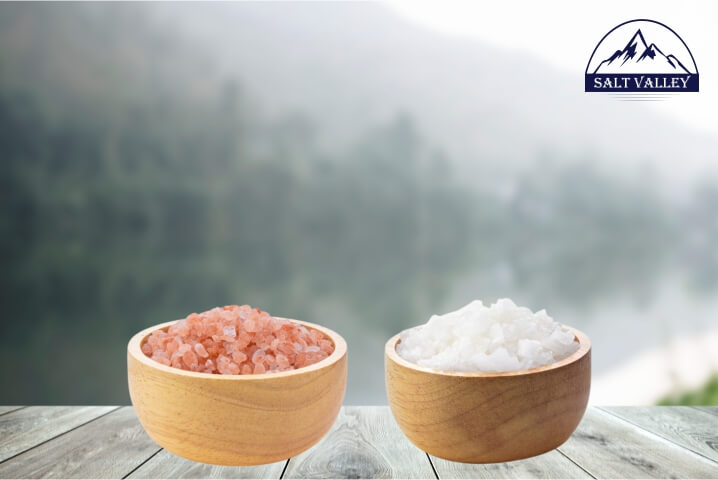 Top chefs around the world are very finicky about which type of salt should be used for different foods and cooking styles. Home chefs don’t have the excess of all types of salts in the market. The most commonly used salts are table salt, Himalayan pink salt, sea salt, and kosher salt.

Out of all these types of salts, kosher salt and Himalayan salt have become the first choice of many home cooks due to various reasons. Knowing more about these two salts and how to use them in the best possible way is one of the important things we all can do to improve our cooking experience.

Here we are going to share the main differences between these two popular salts along with their uses and benefits so that you can make the right salt choice for cooking. But before that let’s see briefly what Himalayan rock salt and kosher salt are?

What Is Rock Salt?

What Is Kosher Salt?

It is a flat-grained salt with no external additives. This salt is also known as koshering salt, kosher flake salt, or flake salt. It primarily consists of sodium and chloride. Where regular white table salt is iodized that adds bitterness to it, the kosher salt is not. It has a very clean and clear taste that subtly seasons the foods.

This salt is obtained from underground salt beds. Its name comes from a Jewish technique for koshering the meat. In which they use kosher salt to extract blood from different kinds of meat.

The more you learn about the salts you use for cooking, you will find that they differ from each other in many ways. Let’s see what are the major differences between Himalayan pink rock salt and kosher salt?

The first thing that makes these salts different is their source of origin and how they are obtained. Himalayan salt is handpicked from salt deposits also known as khewra salt mines using traditional mining techniques. It originated from these mines made centuries ago due to seawater evaporation. These salt mines are the largest and only source of pink Himalayan salt in the world.

Kosher salt is also obtained from underground salt deposits in the form of large crystals. It can also be obtained by using the evaporation method.

Kosher salt has coarse flat grains that are free from any additives. It is mainly composed of sodium and chloride. It normally doesn’t contain any minerals or anti-caking agents.

Himalayan salt composition is the same as kosher salt but the difference lies in the mineral content. Himalayan salt is also made up of sodium and chloride but also contains traces of different minerals and elements. These minerals are responsible for the iconic pink color of Himalayan salt. All these minerals also make it nutritious and help to maintain many body functions.

Is kosher salt iodized? Well, the answer is No! This salt is free from additives like iodine.

Pink Himalayan salt may have some iodine but it is way less than the iodine present in iodized salt.

As mentioned above, no iodine is present in kosher salt and its taste is quite subtle as compared to other salts. If you are worried about daily intake of iodine then let us tell you that if you eat a balanced diet containing fruits and vegetables, you are likely to get a considerable amount of natural iodine and don’t require to take it from iodized table salt.

On the other hand, Himalayan pink salt has a little more strong taste than kosher salt but is subtler than iodized table salt. Iodine imparts a strong flavor to everything it is present in.

Kosher salt has big, flat coarse crystals due to which this salt is easy to handle. You will find both coarse kosher salt and fine kosher salt to suit your different cooking needs. Due to this texture, it is preferable for koshering techniques.

Himalayan rock salt crystals have a compact crystalline structure that increases their usefulness in the form of different home and culinary products. Big pink salt blocks are crushed into different sizes such as fine and coarse.

Kosher salt has homogeneous pure white colored crystals. It is obtained from the salt deposits that are white in color. On the other hand, Himalayan salt has a beautiful pink color with orange and dark brown hues. This color is a prominent feature of Himalayan salt.

The primary use of Himalayan salt is seasoning foods as a replacement for highly refined table salt. It is also used for cooking and food presentation, decorative lamps, and spa treatments.

The main use of kosher salt is also for seasoning meals and koshering meat. It is liked by chefs because of the ease to handle this.

In cooking, Himalayan pink salt and kosher salt can be used interchangeably. There are many recipes and cooking styles that demand different grain sizes of salt. Many chefs prefer kosher salt as it brings out the real flavor of other ingredients without overpowering their taste. It enhances the taste of dishes without making them too salty.

You can use kosher salt because of its consistent grain size. It is specifically best for such recipes that call for flaky salt. When you directly sprinkle it atop of dishes, it adds a crunchy texture to them. When you add it while cooking, it melds in.

Pink-colored crystals of Himalayan salt are best to be used as a finishing salt. It is a good choice for adding in shakers and grinders so that you can easily sprinkle it over soups, salads, or steaks when you want some more saltiness in your food.

Now it’s up to you to decide which one should be stocked in your kitchen.